TASS (2021-09-19). Telegraph: AUKUS partnership was discussed at G7 summit without Macron's knowledge. tass.com According to the report, UK Foreign Secretary Dominic Raab assisted in the preparation of the agreement despite the warnings that such agreement will harm the relations with Beijing and Paris…

ecns.cn (2021-09-19). China to expand cross-border use of RMB. ecns.cn China will expand the use of its currency, the renminbi (RMB), in cross-border payments amid efforts to advance RMB internationalization, said a central bank report released on Saturday.

The Summit of the Community of Latin American and Caribbean States (CELAC), held this Saturday, September 18, in Mexico city, opens the doors to broader relations with China and the European Union (EU). | During the VI Summit of Heads of State and Government of CELAC, several nations called for the dismantling of the Organization of American States (OAS ), and on the contrary, to consolidate Latin American integration and inter-relation, far from the interests of the United States and Canada. | Comparto la foto oficial de la VI Cumbre de Jefas y Jefes de Estado y de Gobierno de la CELAC. Un encuentro de grandes p…

sputniknews (2021-09-18). China May Direct Its Nuclear Missiles Towards Australia as AUKUS 'Serves US' Demands' – Report. sputniknews.com Earlier in this week, China criticized the recently-announced military alliance between Australia, the US and the UK (AUKUS), expected to provide Canberra with technologies to facilitate the construction of nuclear-powered attack submarines.

WSWS (2021-09-18). Britain commits to anti-China axis led by US in AUKUS military pact. wsws.org There was no public discussion in the US Congress or the British and Australian parliaments on the new military pact. All three governments are escalating their war plans without even the pretence of democratic accountability.

sputniknews (2021-09-18). No.10's Biggest Secret: Only Ten People in UK 'Were in the Know About AUKUS Pact'. sputniknews.com The new defence alliance AUKUS, announced by the US, the UK, and Australia on Wednesday, immediately caused harsh criticism from China and France. The EU, in turn, vowed to deal with "the implications" after it was revealed that the bloc was not informed about AUKUS.

WSWS (2021-09-18). US, UK, Australia military pact threatens war against China. wsws.org The advanced US preparations for war are being driven not only by fears that China is overtaking the US economically, but the extraordinary economic, political and social crisis of US imperialism intensified by the COVID-19 pandemic.

Staff (2021-09-18). The US is Turning Oil-Rich Nigeria into a Proxy for its Africa Wars. orinocotribune.com

By TJ Coles — Sep 13, 2021 | Under the cover of counterterrorism, AFRICOM is beefing up Nigeria's military to ensure the free flow of oil to the West, and using the country as a proxy against China's influence on the continent.: | Last month, Nigeria's President Muhammadu Buhari

ecns.cn (2021-09-18). Xinjiang residents dismiss 'Uygur Tribunal' allegations of human rights. ecns.cn Dozens of residents in China's Xinjiang Uygur Autonomous Region have joined government officials in dismissing accusations of human rights violations in the region. Allegations of a genocide were made at a so-called "Uygur Tribunal", which finished its second hearing in the UK on Monday.

TASS (2021-09-18). China conducts military drills near Taiwan after passage of US destroyer. tass.com Combat ships, early warning aircraft and bombers were involved in the drills…

ecns.cn (2021-09-18). China marks 90th anniversary of Japan's invasion. ecns.cn Cities around China organized memorial activities to remember the 90th anniversary of the beginning of the War of Resistance Against Japanese Aggression (1931-45) on Saturday.

WSWS (2021-09-18). US military basing to expand in Australia, directed against China. wsws.org The Washington communiqué commits Australia to hosting US troops, bombers, fighter aircraft and warships and acting as a logistics base for a military conflagration between nuclear-armed powers.

WSWS (2021-09-18). China's Evergrande problems deepen. wsws.org Evergrande, the country's second largest property developer, with debts of more than $300 billion, has admitted it is on the brink of default and is desperately scrambling to build up cash. 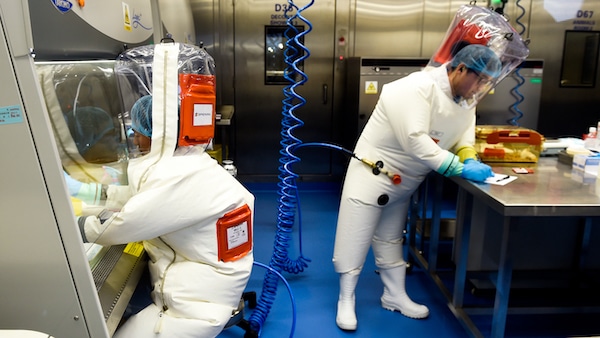 Even if we were to accept all the accusations against the WIV regarding their alleged subpar safety standards, none of it has any relevance to the COVID-19 pandemic unless it can be shown the WIV possessed SARS-CoV-2 in its lab before the outbreak, and there is no evidence of that.