Matthias Brockers, Michael Haller (2022-11-27). Farewell to the unipolar world and Disaster capitalism: back to Marx! indybay.org The sanctions have already proved to be a dangerous boomerang because they hit Europe harder than Russia… It is a suicidal illusion to try to win a war against the raw materials giant Russia – which possesses more than a third of all fossil energies and raw materials on earth – and the world's largest high-tech workshop, China, which is united with it.

Wing Loong II side view, Dubai Air Show 2017. By Wikimedia user (Mztourist) | The Moroccan military has purchased an unspecified number of Wing Loong II from China, the French International Defense & Security (DIS) magazine, which is specialized in defense, armament and geostrategy, revealed in its November issue. | The Wing Loon II was developed by the Chengdu Aircraft Industry Group for use as an aerial reconnaissance and precision strike platform. It has an endurance of 32 hours an… 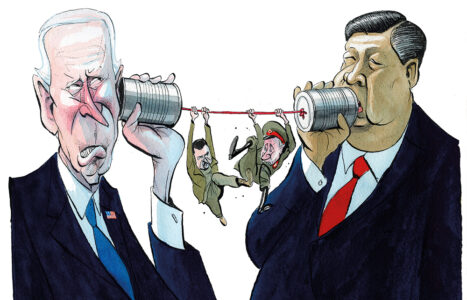 Fight Back (2022-11-25). China committed to support for socialist Cuba. fightbacknews.org Talks took place November 25 between General Secretary of the Communist Party of China Xi Jinping and First Secretary of the Central Committee of the Communist Party of Cuba Miguel Diaz-Canel Bermudez. The discussions took place in Beijing's Great Hall of the People. | According to the New China News Agency, Xi stated, "Cuba is the first country in the Western Hemisphere that established diplomatic relations with the People's Republic of China. Our ties have become an example of solidarity and cooperation between socialist countries, as well as an example of sincere mutual assistance between developing count…

Laith Fadel (2022-11-25). Las Vegas SANDS CEO on long history with China. america.cgtn.com Las Vegas Sands is one of the biggest entertainment, retail and hospitality companies in the world. But just like any other multi-billion dollar conglomerate, the past two years have been a challenge due to the COVID-19 pandemic. In a recent interview with Leaders magazine President …

Internationalist 360 ∞ (2022-11-25). On the Development of China's Environmental Policies Towards an Ecological Civilization. libya360.wordpress.com China aims to build nearly 300 eco-cities We are very pleased to republish this important article by Efe Can Gàºrcan, Associate Professor at Tàºrkiye's Istinye University, which originally appeared in Volume 3 Issue 3 of the BRIQ (Belt & Road Initiative Quarterly). The author argues that China has already developed a firm understanding of its environmental problems…