_____ (2021-04-10). Truth Commission Details Horrible Crimes Akin To Native American Genocide And Slavery. popularresistance.org With a new Cold War heating up between the U.S. and Russia and China, Witness for Peace Southwest, Addicted to War and CodePink organized a Truth Commission on the original Cold War on March 21st, which brought together the testimony of historians, activists and others who lived through the period. | Following a hearing three years ago, the Zoom event was hosted by Frank Dorrel, publisher of the popular anti-war text Addicted to War, and Rachel Bruhnke, a high school Spanish teacher and member of Witness for Peace Southwest. In her opening remarks, Bruhnke emphasized that the Cold War should rank as one of three… 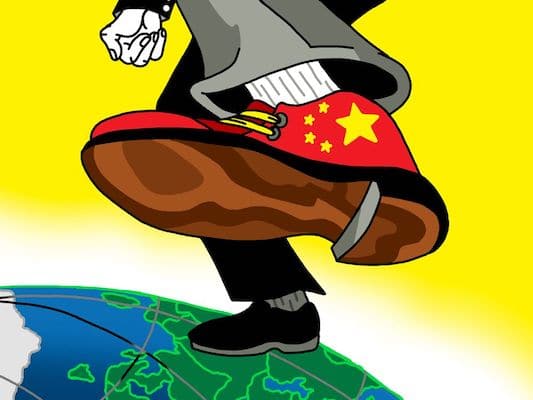 Over the past few weeks, the subject of anti-Asian racism has received an unusual degree of Western media attention, ever since a video showing the January 28 killing of Vicha Ratanapakdee, an 84-year-old Thai immigrant in San Francisco, was widely shared on social media. | April 10, 2021 | Newswire…

_____ (2021-04-10). Pentagon Campaign To Recruit Vietnam Against China Exposes Delusions Of War Strategy. popularresistance.org When the Pentagon began gearing up for a future war with China in 2018, Defense Department officials quickly realized that they needed access to Vietnamese territory for troops armed with missiles to hit Chinese ships in a US-China conflict. So they initiated an aggressive campaign to lobby the Vietnamese government, and even Communist Party officials, in the hope that they would eventually support an agreement to provide them the permission. | But a Grayzone investigation of the Pentagon's lobbying push in Vietnam shows what a delusional exercise it was from its inception. In a fit of self-deception that highlig…

ecns.cn (2021-04-10). China calls for Japan's cautious decisions on Fukushima wastewater. ecns.cn China on Friday urged Japan to be cautious on its plan to deal with radioactive water from Fukushima nuclear power plant, calling for the Japanese government to make decisions based on full consultation with neighboring countries.

The Lancet (2021-04-10). [Editorial] China's response to COVID-19: a chance for collaboration. thelancet.com April 8 marks a year since China's lifting of the 76-day lockdown in Wuhan—the epicentre of the COVID-19 outbreak. Since the reopening of Wuhan, efforts to control the pandemic in China have thus far successfully prevented resurgence and importation of new cases, while re-establishing the country's social and economic activities. Although China has since had sporadic outbreaks of COVID-19 in several areas, including Beijing and Qingdao, they were all contained. How has China managed to control COVID-19? And is the global scientific community in a position to benefit from China's experiences?

ecns.cn (2021-04-10). ASPI's Xinjiang 'victim' database is another tactic to smear China: Officials. ecns.cn The Australian Strategic Policy Institute (ASPI), which compiles the data of "victims" in Xinjiang, is "another apparatus of the anti-China campaign under the cover of 'independent-study'," said Xu Guixiang, spokesperson of the government of Xinjiang Uygur Autonomous Region, at a press conference in Beijing on Friday.

ecns.cn (2021-04-10). Xinjiang teacher chose to go 'where country needs me most'. ecns.cn For Guljahan Amat, applying for membership in the Communist Party of China was a must-do.

ecns.cn (2021-04-10). Ban on Xinjiang cotton called anti-China ploy. ecns.cn The United States' ban on Xinjiang-grown cotton over allegations of "forced labor" is aimed at destabilizing China, said some peace activists who also accuse the U.S. government of failing to address its own human rights violations.

People Before Profits (2021-04-10). US is 13th in Infrastructure, 27th in Education and Healthcare. indybay.org As Pres. Biden embarked on a campaign for improving US infrastructure by raising the corporate tax to 28% (was 53% in 1950s), he provided a ringing indictment of the US private-profit-first economy with a list of the 12 countries that have better infrastructure than the US: 1. Singapore, 2. Netherlands, 3. China, 4. Switzerland, 5. Japan, 6. South Korea, 7. Spain, 8. Germany, 9. France, 10. Austria, 11. United Kingdom, 12. United Arab Emirates. See mothership.sg/2021/04/joe-biden-infrastructure-singapore/…

Prabir Purkayastha (2021-04-10). The West is practicing vaccine apartheid on a global level. peoplesdispatch.org 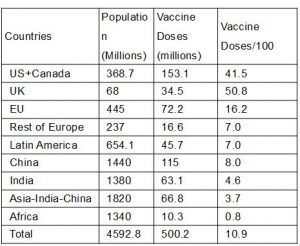 China and India are the only two major countries that have been willing to export vaccines while also vaccinating their own people. Meanwhile, to rich countries, the billions of dollars of vaccine market for Big Pharma far outweigh the benefits of saving millions of lives…

_____ (2021-04-10). Why China's Vaccine Internationalism Matters. popularresistance.org United Nations Secretary-General António Guterres called it "the biggest moral test" facing the world today. World Health Organization Director General Tedros Adhanom warned of a "catastrophic moral failure" whose price would be paid with the lives of those in the world's poorest countries. | Such cautionings of inequitable global vaccine distribution have been shunted to the margins; instead, optimistic chatter of "returning to normal" is circulating once again as Global North citizens line up for their long-awaited COVID-19 vaccine. But normal, as ever, is relative: public health advocates warn that some countr…

_____ (2021-04-09). Senate Unveils Sweeping Legislation To Confront China. popularresistance.org The Senate Foreign Relations Committee announced a new piece of bipartisan legislation to confront China through prioritized military spending and more arms sales in the Indo-Pacific, sanctions, money for "democracy promotion" in Hong Kong, and other areas where the US seeks to counter Beijing. | The legislation still needs to go through the Committee before being introduced in the Senate, but a draft of the bill, titled the Strategic Competition Act of 2021, was released by Senator Bob Menendez (D-NJ), the Committee chairman. Menendez negotiated the bill with Committee Ranking Member Jim Risch (R-ID). | In a rel… Claud Cockburn —father of Alexander, Andrew, and Patrick, three brilliant journalists— was the original model. In 1967 his three volumes of autobiography were consolidated and published by Penguin as I, Claud… It's hard to find a copy these days, so I'll quote up to the legal limit. Claud Cockburn was born in Peking (now Beijing) in 1904. His father, 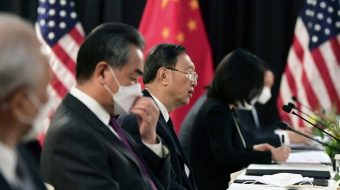 WSWS (2021-04-09). Australian government ministers denounce student newspaper for pulling anti-China story. wsws.org The hysterical intervention underscores the official sensitivities over any pushback, however limited, against a xenophobic campaign aimed at justifying preparations for war against China.

Michael Welch (2021-04-09). The Raging Twenties Review: Pipelinistan, Sino-Russia and more. globalresearch.ca "Not only they were presented the next 5-year plan 2021 to 2025 we were presenting three subsequent plans all the way to 2035. They're already thinking about the technical commercial configuration of China in 2035 so that's the… I …

Finian Cunningham (2021-04-09). Arsonist US Plays With Fire. dissidentvoice.org You would think riling up one nuclear power is bad enough, but the United States seems intent on doubling the risk of starting a world war by gratuitously aggressing Russia and China simultaneously. Throwing around personal insults against the leaders of those two countries is one thing. But actually winding up military tensions is quite …

Oliver Boyd-Barrett (2021-04-09). Limitations of JCPOA Negotiation. dissidentvoice.org On April 1 — appropriate date, perhaps, for a saga of unending western foolishness and villainy — the EU announced that officials from Iran, Russia, China, the UK, France, and Germany would be meeting virtually to discuss a possible return of the USA to the Joint Comprehensive Plan of Action (JCPOA). Later announcements indicated that …

teleSUR (2021-04-09). US: Biden Requests Over $700 Billion for 2022 Pentagon Budget. telesurenglish.net U.S. President Joe Biden plans to request a whopping $715 billion for his first Pentagon budget, signaling efforts to confront China and Russia by advancing hypersonic weapons and bolstering its War Fleet with ballistic missile submarines and unmanned ships. | This $715 billion for the Defense Department is 1.6 percent higher than the $704 billion approved for this year, but would amount to a decrease of about 0.4 percent in real, inflation-adjusted terms. The request is just the beginning of what is sure to be a vigorous debate in Congress over how much to spend on defense and how to finance it, according to…

ecns.cn (2021-04-09). China contributes to global anti-pandemic drive by bridging 'vaccine divide'. ecns.cn "Vaccine equity is the biggest moral test before the global community," United Nations Secretary-General Antonio Guterres has said. At a time when COVID-19 is ravaging the Middle East countries, China has withstood the test.

ecns.cn (2021-04-09). Global experts see COVID-19 lockdown in Wuhan last year as 'timely, wise step'. ecns.cn After a 76-day lockdown against COVID-19, China's central megacity of Wuhan was finally reconnected with the rest of the world on April 8, 2020. One year on, China has made enormous efforts to contain the pandemic and contributed to the global battle against the virus.

ecns.cn (2021-04-09). China, India in talks ahead of 11th round of military talks. ecns.cn When asked if the next military talks between top-level officials from China and India will be delayed, a Chinese official on Thursday refuted the remarks, saying that the two sides are still "in talks" for the meet-up.

ecns.cn (2021-04-09). Major tech fair to be held in Shanghai. ecns.cn The 8th China (Shanghai) International Technology Fair will be held from April 15 to 17 at the Shanghai World Expo Exhibition &Convention Center, government officials announced on Tuesday.

ecns.cn (2021-04-09). China refutes U.S. 'intimidation' accusations. ecns.cn China on Thursday refuted U.S. accusations of the country conducting "intimidation actions" in the Taiwan Strait and said that the label of "intimidation" or "coercion" can never be pinned on China.